A flexible software-first approach is the answer to improve the real-time control of industrial robots and future-proof manufacturing lines, say experts at Symbio Robotics

Creating new industrial automation can be challenging. Designing and building work cells to execute even simple tasks done hundreds of times per day on parts that fall in and out of tolerance, for environments that can run anywhere from freezing to sweltering heat, requires significant engineering talent and experience. To make matters worse, we traditionally design new automation with one hand tied behind our backs by not using proven software development methods. Shifting the design of automation to a software-first approach, using design principles of flexibility, and modularity, can increase reliability and drive advanced application deployments.

Failures of the current methodology

Today, the standard process for new automation development is heavily invested in the mechanical design of fixtures, jigs, and end-of-arm tooling with software development as an afterthought. Why is this? All industrial automation is built on physical building blocks, including robots and PLCs. Historically, the electronic control systems associated with these components lacked the computational horsepower necessary to execute more advanced software, such as artificial intelligence. Further, the safety certification requirements associated with these systems significantly increased the cost of each additional line of code.

Automation development practices creating barriers to new applications (Data for 1993 courtesy of IFR Statistics. Data for 2003 and 2013 courtesy of RIA)

Because of this limited use of the power of software, new industrial automation has been developed primarily through mechanical design in the same way for more than 30 years. And it has worked. Well, sort of. As shown in the graph above, automation has been executed at scale on a specific subsegment of automotive manufacturing applications - primarily welding, painting, and material handling applications across that timespan.

In fact, if you tour any major automotive OEM factory in the United States you find greater than 90 per cent adoption of automation in body and paint shops but little to no automation in assembly and kitting applications. This is because part and process variation in these underserved areas make them too costly and impractical to automate using a mechanical-first approach. The methodology historically used in developing manufacturing automation limits its growth.

Many OEMs have responded to these developments by standardising various pieces of independent car models onto a few multi-purpose platforms. By requiring the same parts across various models, manufacturers can spread automation investments across a larger portion of their production volumes in a given year. In essence, these companies have applied artificial requirements to their product design to make the cost/benefit calculations work. Even premium automotive companies have adopted this strategy to better their bottom lines. In doing so, they limit the variety of options offered to their customers, reduce the number of market subsegments they can target, and diminish top-line growth.

A better solution can be founded in a strategic shift in the system that is causing the problem - the manufacturing process. The paradigm shift relies on two fundamental principles of modern day software - modularity and flexibility. Software modularity can be most simply understood as the decomposition of software applications into independent modules with defined interfaces. These interfaces can take the form of application programming interfaces (APIs) when related software capabilities are built into a software library. Modular software building blocks can then be applied across various applications and used multiple times throughout different automation applications. In this way adopting modularity can improve the return on investment in automation without forcing compromise on product design.

Shifting investment from mechanical bespoke development to software also enables flexibility. Current industrial automation development is primarily a mechanical-first approach largely because industrial robots are tools of high-precision and reliability but not intelligence or dynamic response. For example, most industrial robots today are not enabled with vision or a sense of applied force, i.e. touch. These senses are critical for recognising the success or failure of a task. But incorporating a software-first approach can enable various vehicle models to be serviced by the same application with minor parameter changes. This not only reduces the need to redesign jigs and fixturing with each new vehicle model but also allows far more robust solutions capable of learning to overcome various failure mechanisms rather than simply failing and leaving it to human operators to fix.

Reuse of proven software components and more flexible solutions can create more cost efficient manufacturing solutions and can enable shorter product lifecycles. At a major automotive OEM based in North America, Symbio recently delivered an application into production and found that learning software enabled an estimated one hundred times faster ramp to production and total cycle time savings of three seconds, an approximate 20 per cent savings. In this application a torque converter, which is a mechanical system of nested gears, is inserted into the larger automatic transmission system. During integration the teeth of each nested gear must properly mate without impacting the coupling of the other nested gears. Force-feedback and automated learning enabled the customer to optimise a sophisticated integration process more quickly than previously possible. In the video provided, we demonstrate this learning by enabling the software to explore the parameter space and ultimately learn the optimal model for integration on a single part combination randomised with each integration.

Another application delivered by Symbio to a major automotive OEM used advanced learning software based on real-time force feedback to enable a bolt running robot to overcome bolt location uncertainty. Symbio retrofitted an existing piece of automation that was failing to meet first-time yield requirements because of part location variances. If learning software had been considered in the original automation design, then simple off-the-shelf jigs could have been used - reducing the cost and time to deliver the automation. In the video below we witness a lab set-up where part location variance is created by manually resetting the part. Still, the software enables the robot to locate and execute the bolt running task without cross-threading the bolt in the process. 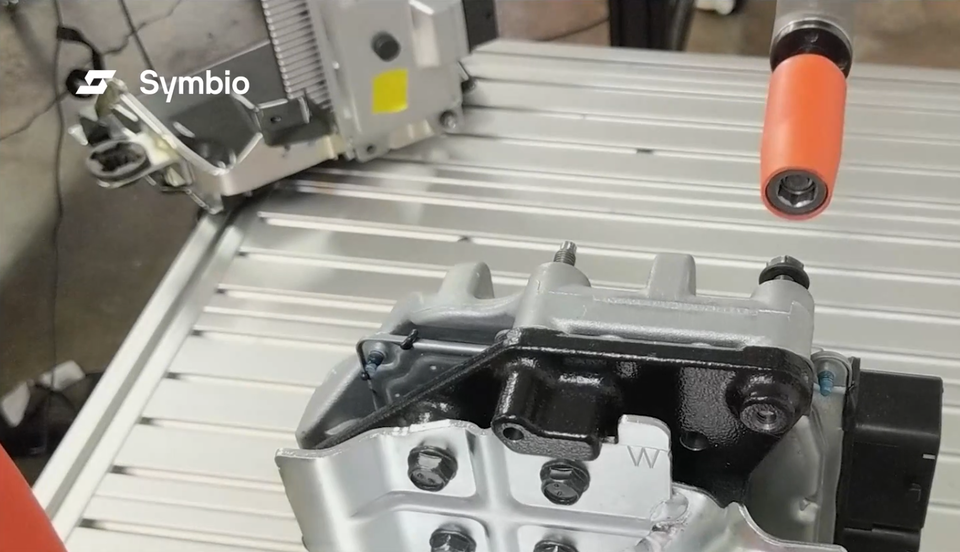 In another example, a vision feedback system and artificial intelligence software were used to precisely position a robot arm to execute tasks on a moving line with millimeter-scale accuracy. Generally, mechanical coupling systems fail to enable automation of moving line applications because they cannot fully account for randomised tolerance stack-up errors in the design phase. Using a camera to dynamically alter robot execution in real time removes the unexpected failures of a mechanical-first approach and enables automation of manual tasks that previously could not be reliably automated.

Looking to the future

It is impossible to predict exactly how consumer expectations will evolve and change. For example, we know hybrid and all-electric vehicles could someday make up the majority of vehicles on the road, but when that will happen still remains unclear. One way to future-proof manufacturing lines is with increased flexibility and modularity through a software-first approach. This paradigm shift means the manufacturing automation used today can enable the manufacturing lines of tomorrow. Whether cars are powered by electrons or gas, are driven or drive themselves, or move on wheels or something entirely different, we’ll always need automation to assemble them with quality and efficiency.