Now in the guise of ‘cobots’, robots often work not just alongside, but with their operations integrated with those of co-located people. Mike Farish reports

According to Christoph Hock, systems head of human robot collaboration (HRC) for German robot technology supplier KUKA, relevant applications can be found in almost all sectors of automotive production, but they are nevertheless not yet pervasive. He says that though many car manufacturers have implemented the approach the absolute number of applications is still less than was predicted when the technology first appeared.

“It is still a question of value for money,” Hock explains. “The technical effort required to match human abilities is enormous. Cobot applications can often ease workers’ duties, but only by a certain amount so for many OEM applications the return-on-investment is not yet practical.”

Hock provides a reminder that a cobot is still “obviously classified as a robot” and that if, for instance, some sort of malfunction occurs it would not be the adjacent operator that would solve the problem but a specialised maintenance technician. But “as of today maintenance rather refuses to change this situation,” he states. “That is why ‘easy to use’ is emerging as the ideal for cobots.”

But Hock is confident that in appropriate applications the use of cobots will continue to grow. He identifies “screwdriving, bonding and quality assurance” as areas in which their implementation will most likely increase. He also says that he expects “various types of applications will appear without a safety fence in which the focus is not necessarily on the cobot itself, but rather on the combination with intelligent safety monitoring.”

The technical effort required to match human abilities is enormous. Cobot applications can often ease workers’ duties, but only by a certain amount, so for many OEM applications the return-on-investment is not yet practical

Nevertheless, Hock also makes the observation that “a technology that has not established itself within the industry is hardly considered by production planners for their next new projects.” So, while he concedes that “almost every innovation has to overcome these hurdles”, he also indicates that for HRC technology future implementations will be facilitated by a holistic approach in which cobot usage will be a fundamental consideration right from the start. “The ability to design applications on a blank sheet is crucial,” he states.

As such Hock views the current situation regarding cobot applications as mixed. “There is still room for improvement in our understanding, but there are also projects that have already been successfully implemented,” he says “So, it is definitely possible.”

One recent successful application of KUKA’s cobot technology has taken place at the Ford plant in Cologne, Germany, where four of the company’s iiwa lightweight machines are working alongside human operators in the application of sealants in the body-in-white area. The machines have been performing this task, which for people is unpleasant and monotonous, since November 2017. Ford itself confirms that their integration into the existing production line went smoothly and that no safety fences or additional safety components have been required.

The robots apply a defined amount of sealant at exactly the same position every time. This both ensures leak-tightness of the vehicle body and obviates any requirement for rework in the paint process. There is simply no problem of excessive adhesive application. Furthermore, programming is carried out by means of simple manual guidance. An operator needs only to guide the cobot through any required manoeuvre on a single occasion for the machine to learn the precise required motion sequence, which it can then execute independently. Speed of deployment is therefore a key attribute.

KUKA also confirms that initial trials of cobot technology have taken place at the Ford plant in Saarlouis also in Germany. In this case the application is for the automatic calibration of gap and flush-mounting on doors and fenders again using the iiwa machine in an HRC assembly line though further details are not yet available.

Meanwhile a recent application of conventional standalone robotics is to be found in two manufacturing cells that have been in operation at BMW’s plant in Leipzig, Germany, since the early part of 2020. The cells each comprise a six-axis robot from major supplier ABB utilising both software and ancillary hardware from Danish company Scape Technologies in bin-picking operations for two different type of component – respectively luggage compartment floors and cross beams.

Further details are provided by René Dencker, chief technology officer and one of the co-founders of Scape which has been supporting bin-picking operations since 2006 and now claims over 80 installations using its software and hardware around Europe. He explains that the luggage compartment floor cell mounts the robot on a slideway so that it can move laterally thus providing a seventh axis and handles just one part. In contrast the cross beam cell uses a fixed robot but actually handles two distinct parts – left and right versions of one beam and is prepared to handle third longer beam.

In the cross beam cell, the hardware supplied by Scape comprises the tool unit at the end of the robot arm with different grippers, handling station to ensure high-precision grip, three scanners, part turner and combined lights and camera. The cell can process the three parts which weigh from 0.4-0.7kg and are approximately 320x140mm in length and width with a cycle time of 15-20 seconds. Meanwhile the luggage compartment floor cell combines the robot with a scanner and appropriate tool to process a workpiece weighing over 1.0kg and measuring approximately 1,100x800mm every 30-40 seconds. The cells, which were installed over a three-week downtime period at the plant, replaced previously completely manual procedures.

The Scape software in use at Leipzig demonstrates the extent to which specialist application programs can provide standard robots with highly customised capabilities. “The software can be used with any kind of six-axis robot, including cobots,” Dencker confirms. “It takes over the control of the robot or cobot inside the bin to handle collision avoidance, joint limits and singularities. Then its ‘Orientation Control’ capability ensures a high precision grip after the bin-picking, which is fundamentally impossible to guarantee in the bin.”

It is also highly flexible in its capabilities being equally adept at retrieving parts that are stored in the bin randomly or in a structured manner. Part sizes can range from just a few millimetres to as much as six metres in length. 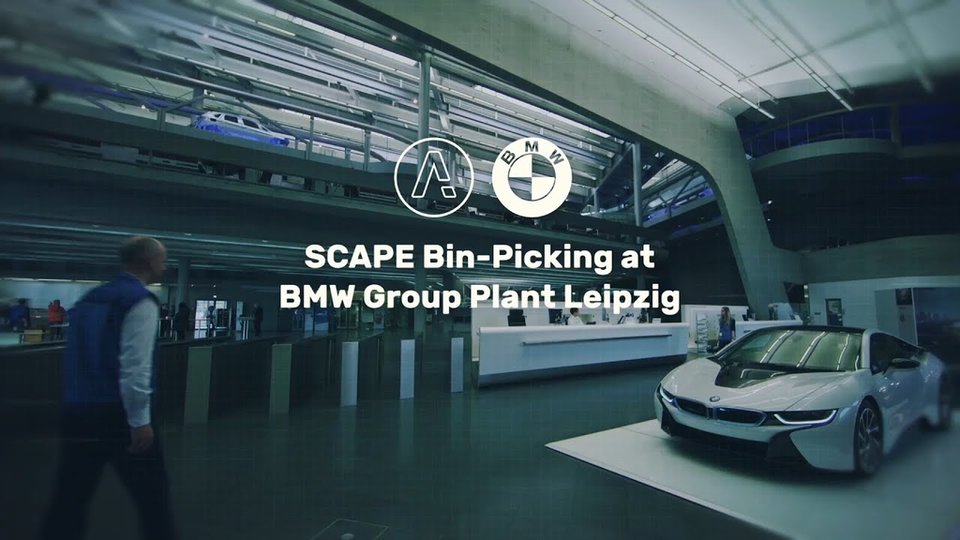