Ahead with the curve

Performance vehicle structures have long made extensive use of composite materials and the new generation of General Motors’ flagship sportscar, the Corvette Stingray, continues the push. A key composite component of the new Corvette Stingray is a curved carbon fibre rear bumper beam, created through a bespoke application of radius pultrusion.

The process sees optimised fibre and fabric guide systems feed the complex set of reinforcements into chrome plated steel Radius Pultrusion moulds. The line controls a complex set of reinforcements including carbon fibres running from a creel, biaxial, triaxial and stitched unidirectional carbon fabrics – all with glass surface tissues for stabilisation and a better surface finish. The installation is set to deliver an annual production capacity of 70,000 parts.

For GM, what is innovative about the rear bumper beam for the Corvette is the fact that it is a constant radius pultruded part. GM say it’s the first in the automotive industry and the production cell used to create the part at Shape Corp is the first of its kind in North America. 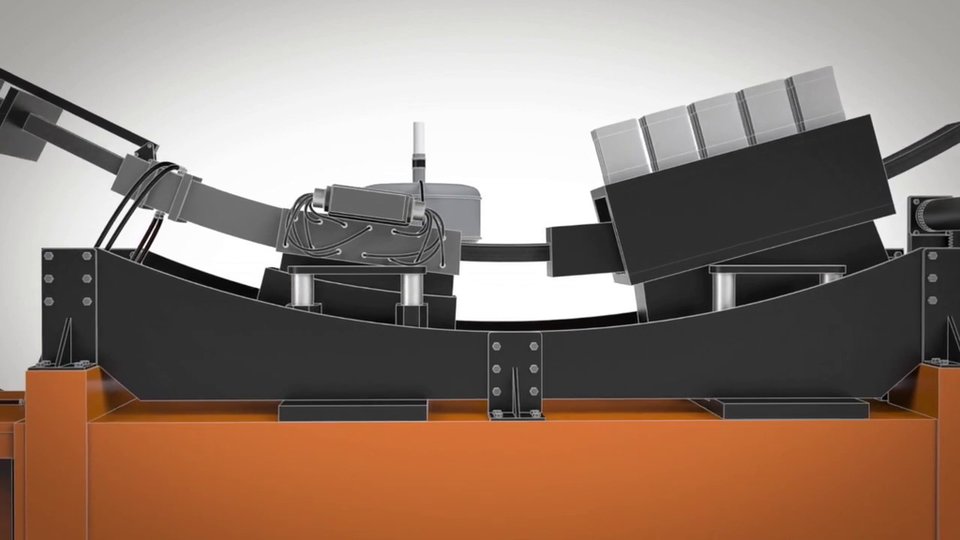 In action, TTI’s production cell for the curved carbon fibre rear bumper beam of the 2020 Corvette Stingray, installed at the Shape Corp facility in Michigan

Ken Workinger, a pultrusion process engineer at Shape, says: ”The programme has spanned at least five years. It started with Shape Corp working with GM on the front bumper of the new Corvette Stingray – but as so often happens, we saw some technology at a trade show. We brought it back to GM and said we think we can develop this in partnership with the suppliers to give you a rear beam. They liked what they saw and decided let’s go for this.”

The line runs 8 different rolls of fabric, with 87 bobbins of carbon tow, all feeding into a series of cards and into the machine, Workinger explains.

"It’s very impressive considering the size of the part that comes out. But that’s the nature of pultrusion – it’s consolidating a lot of fabrics, getting it to exactly where you want in the part, making sure it stays and then curing the resin. And out it comes in a continuous fashion.”

It’s the only example in automotive. Curved profiles are a niche in the pultrusion market – Sebastian Mehrtens, TTI

Workinger says the technology is a “game-changer” in the automotive industry because it’s a continuous process that Shape can cater to the needs of OEM customers very effectively.

Shape engineering manager Toby Jacobson concurs: ”The great thing about composites is that you can customise. But also that makes things very challenging. You have an infinite number of possibilities, with different materials and different orientation.”

Shape had a cross functional team that helped to develop the rear bumper beam with computer-aided engineering, materials, processing, manufacturing and product engineering. Jacobson says: ”All types of skills were required to pull off something like this.”

The Corvette bumper beam project has netted Shape a cluster of industry awards including a supplier innovation award from General Motors itself.

A key composite component of the new Corvette Stingray is its curved carbon fibre rear bumper beam, created through a bespoke application of radius pultrusion

Q&A: Sebastian Mehrtens of TTI – suppliers of the radius pultrusion installation at Shape

AMS: A notable aspect of the Corvette project is the first automotive use of the radius pultrusion process to produce a rear bumper beam, how did the innovation originate?

Sebastian Mehrtens: We started in 2015 when Shape’s Toby Jacobson visited us at JEC in Paris. We got an order for a prototype but that was not related to Corvette, it was just a generic bumper beam – but curved. And they had a similar bumper beam, straight, also made in pultrusion. But this one had to be curved, so we produced a prototype which they showed to their customers.

Radius pultrusion was presented the first time in 2008 and we had some small projects in different sectors – some automotive, some sporting goods, oil and gas, luxury yachts, for example. But definitely with the Corvette bumper beam, this is the biggest radius pultrusion project we’ve had.

What particular advantages has the pultrusion process delivered in manufacturing composite components?

If you look at other composite production processes, sometimes you have a lot of hand work – like in aeroplanes, which is why they are expensive – or you need a lot of automation and equipment, again that makes it very expensive. Pultrusion has the advantage that it’s a highly automated process, without costs for robots and so on. If you want to make a lot of straight or curved profiles, it’s quite easy because you are producing a profile every minute. The only thing you have to do is to cut it, and that’s quite easy.

In contrast with the usual composite component production, which can rely heavily on manual processes, TTI says pultrusion has the advantage that it’s a highly automated, such as this production cell at Shape

For the Corvette project at Shape, how were you are able to produce curved profiles?

The mould is not fixed, it’s moveable and it’s also curved. There’s full curing inside the mould, it’s not a bending process. When you start to bend something you have inner stresses and higher tolerances. But if we do this in a mould, you get a very precise result with low tolerances. The machine for the Corvette bumper is very special but the moulds are the same steel for curved moulds as for traditional pultrusion moulds.

Is the Shape installation at Michigan a single example?

It’s the only example in automotive. Curved profiles are a niche in the pultrusion market. When we looked at it we thought, this was a special machine for curved pultrusion but what if we take the same idea and transfer it to the linear pultrusion. We said, if we focus also on the straight market we can make a machine that makes straight profiles for the mass market. The result was pullCUBE.

It’s also possible to make curved profiles with pullCUBE. Had we had pullCUBE earlier, the Corvette bumper would have been made on pullCUBE.

So the installation that Shape are using in Michigan led you to product innovation of your own?

Yes, the special thing about pullCUBE is that it’s very short. If you look at traditional pultrusion machines they are 10-15 metres. pullCUBE is only 3 metres long. So you don’t need a special building or work area. It can be done in any regular production facility.

How did you achieve that smaller scale?

In moving the mould and not the gripper, we don’t need the travel path of the two grippers, we only have one gripper and it is fixed. The mould moves only 10-15cm, quite a small distance. Then we are using active cooling, so there’s no need for ambient cooling. Active cooling has the advantage of better control. There are some customers who in winter have 10ºC at the facility and in summer they have 35ºC. So with active cooling, the moving mould and the single fixed gripper we were able to reduce the size dramatically. We also have a saw, a flying, cut-off saw that clamps on the profile. All in 3.5 metres.

Read more on composites at ams