The leaders of the pack

Producing battery enclosures and packs is an important part of EV assembly, and manufacturers are focused on further standardisation of components and using automation to improve quality. Jason Dunn reports from the AMS Evolution Summit held online in December

Traditional combustion engine powertrain production has been evolving for decades, with highly automated and refined processes for engine and transmission assembly. Battery cell and pack production, however, is still relatively new, especially at scale.

However, as carmakers and battery cell manufacturers ramp up electric vehicle output and build new gigafactories for regional battery production, they are also re-orienting their plants to integrate battery cells and assemble EV battery casings and packs.

Increasingly, OEMs and suppliers are putting greater focus on standardising battery enclosures and parts, as well as putting more focus on battery cell and module design, with growing opportunities to automate different processes.

OEMs are building battery packs and enclosures either close to final vehicle assembly or at the same plants. In other cases, carmakers are even planning production that will see battery cell, pack and vehicle assembly in the same campus, such as for Tesla in Berlin, Renault in northern France, Nissan in the UK, Ford and GM in the US, along with others.

The integration of battery packs changes aspects of the manufacturing processes, notably for body and welding, final assembly, quality control, inspection and robotics. Battery pack systems involve essential software, different minerals and materials, along with casings that impact the tooling that manufacturers use, as well as factory layouts.

Matthews told the event that as EVs become mainstream and output accelerates, scaling production of battery packs will present the most significant challenge. The main objective for manufacturers will be to keep the same quality and price even while integrating new technology more frequently.

For battery packs, the key shift is that manufacturers are increasingly installing them into vehicles at different points in the production process. They are also becoming more of an engineered feature of the vehicle body, which has implications for materials, ductility, welding and other bodyshop processes.

"We see that the battery pack is going to become a more integral part of the vehicle," Matthews said.

As battery range is extended further, Matthews also expects that they will have more kilowatts, and thus are likely in many cases to grow even larger. Manufacturers are already installing conveyors and automated logistics processes to improve efficient handling and line feeding of batteries, and the trend will evolve further.

We see that the battery pack is going to become a more integral part of the vehicle.”
Patrick Matthews, ABB

More standards are key to automation

Matthews said that one of the current challenges for battery packs is in interconnecting the wiring and busbars – the metallic strips that house switchgears, panel boards and bars for current distribution.

Traditional wiring harnesses don't lend themselves well to automation, as they require considerable manual work to connect different wires and components. However, engineers are creating designs that are friendlier to automation.

According to Zeiss’s Paulo Cruz, the next revolution will be in more standardisation of batteries, as OEMs will demand greater commonality in components, designs and materials. The different types of technology and components for cells and packs also make a joined-up view on quality control in the supply chain important, added Cruz. Inspection and parts identification needs to be rigorous to ensure production is certified and tracked.

"Battery enclosures must provide integrity, driving range, and safety,” said Cruz. “To ensure quality control of all these items in the entire process, it's important to start from the material from the battery cell until the complete part, which is what will give manufacturers complete control.”

The next revolution will see greater standardisation of batteries, as OEMs demand more commonality in components, designs and materials

To ensure quality control of all these items in the entire process, it's important to start from the material from the battery cell until the complete part, which is what will give manufacturers complete control.

Cruz said that quality control in battery cell production typically relates to monitoring components in the "nano and micro world". Different components in battery cells are produced in separate facilities – whether anodes, cathodes, separators and other parts – through different suppliers and often completely different processes.

But the challenges for battery enclosures include larger parts and a greater variety of suppliers. For the final pack and enclosures, OEMs must manage the production between tier one and other facilities, as well as a mix of green and brownfield facilities. Production methods and technology can be different depending on product, including different amounts of sensors, electronics, software as well as cell design.

"What is challenging for us is determining what kind of technology we need to place inside the enclosure," Cruz said.

Automation from cell to pack

There are also different types of battery cells, and until that evolves in a standard direction, producers will face difficulties in automating the battery manufacturing process, according to Matthews.

"I think you're going to see variability between suppliers as everyone will be fighting for those precious batteries," he said.

Changes in the design and distribution of cells in the battery enclosures will be an important development in the overall efficiency and potential for automation in battery production.

"Battery cell and pack production are going to have to be automated, no doubt about it,” said Matthews. “It can't be hand built in order to meet the demands of customers.”

Currently, most battery packs have a modular arrangement of battery cells, with each module containing a certain number of cells which are then fitted into the battery enclosure. However, more battery manufacturers are designing ‘cell to pack’ batteries, which will eliminate the modules and essentially allow the cells to be a structural part of the battery – thus making the overall battery a more integral piece of the whole vehicle body. That will make manufacturing more efficient, and eventually allow for greater automation of the overall process.

Matthews predicted that EV batteries would eventually standardise, with more established production and quality control processes like traditional powertrains. But there will be considerable uncertainty in which types of technology will eventually gain more prominence. For example, some OEMs are investing more in hydrogen fuel cell powertrains. Likewise, solid state batteries or other technology could also introduce yet further technology and process variety. OEMs, battery manufacturers, suppliers and technology specialists will have to work together closely to co-create production and automation processes, especially as manufacturers introduce new battery and powertrain types. 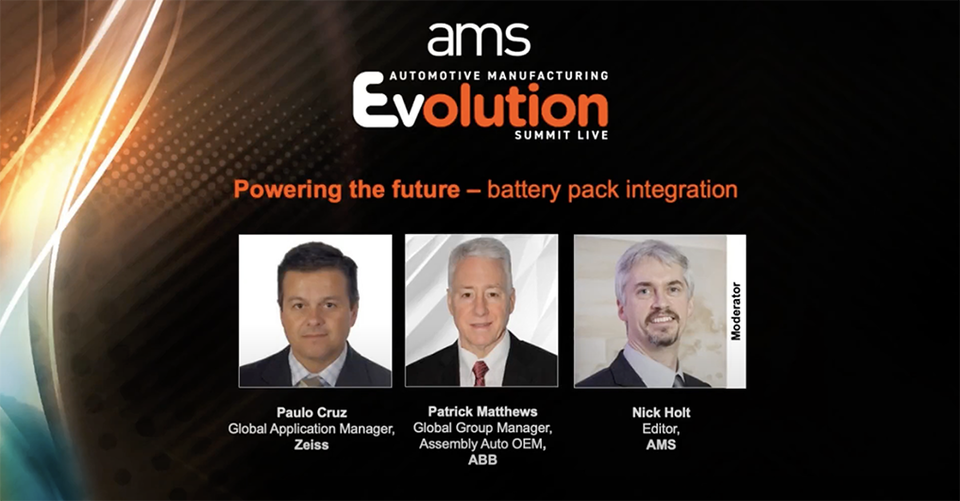