Introducing a completely new model to the production line and ramping up to mass production is a challenge. The team at Honda’s East liberty Auto plant have deployed a VR training system to support the assembly line workers with impressive results. Nick Holt reports.

The East Liberty Auto Plant (ELP) in Ohio, US, began vehicle production in 1989 and since 1996 has been producing Acura models. The latest of these is the all-new 2022 Acura MDX, which started production in January this year. To prepare the workforce to build this new model, which Honda says is the most technologically sophisticated SUV in Acura history, ELP introduced a new interactive 3D virtual training tool. “This is the first time we have used this for a full model change,” says Joey Sippel, training director, for the assembly department new model/Acura MDX. Regarding its wider use across the Honda network he adds: “We started this at East Liberty in collaboration with another North American plant, but it wasn’t part of a global Honda initiative at that time.”

The system utilises a virtual reality touch screen training system to simulate the assembly process for the MDX, featuring four levels that progress in difficulty to ensure the associates become proficient with each process. Sippel notes: “Our goal was to virtually recreate every assembly step. We wanted to change the way we train our associates, to enhance their abilities. It was focussed on the people, to create flexibility and offer new ‘tools’ that, through the interactivity of the VR, improved their understanding of the assembly processes.”

Looking at the VR system’s wider application across production operations at ELP, engineering/manufacturing leader for global production of the Acura MDX, Bill Ramsey, says: “We have a single line producing the CRV, Aura RDX and MDX, and our intention is to use this VR technology beyond the MDX build.” Sippel adds:” Yes, Looking further ahead we’re looking to use this training system more widely across our mass production operation, not just for new models.”

Training earlier in the process

Bringing in new technologies to support production operations, such as this VR system, is a growing trend as OEMs seek to make their manufacturing networks more flexible and efficient. However, any new technology must be equally flexible to manage shorter product life cycles with more frequent model changes and updates. It must also be user friendly if workers are to fully benefit. On these points Sippel explains: “It is very straightforward to adapt this system for these changes. We have a team of ‘creators’ on the training side, they take the operation standards and plug them into the system and create the animations within the VR, and they update this throughout the new model process.

Because the much of the vehicle design process is done in a digital, virtual form, with this training technology we are able to begin at a much earlier stage. Without the need to have a physical vehicle in place – Joey Sippel

“The VR nature of the tool allows us to begin the training process earlier, so we began with a ‘kick-off’ session bringing in the required associates and team leaders for a run through of the system. After that one session they had a good understanding of how the system worked.

“Prior to starting mass production, we trained over 1500 different associates in assembly and had over 8000 cycles using this training tool. So, I’m very proud of our team, they were able to keep the system and the associates updated throughout the model flow.”

Introducing a new training programme alongside the ramp-up of production for the new model might not be ideal but the VR enabled much of the assembly training to be done in advance, without the use of the physical vehicle. Sippel explains: “Because much of the vehicle design process is done in a digital, virtual form, with this training technology we are able to begin at a much earlier stage, without the need to have a physical vehicle in place.”

Ramsey adds: “To put this into perspective, before we had this tool we might usually have had only one vehicle to train on, and you could only train two or three people on this at any one time. What this tool has allowed us to do is train all of our associates. On any given shift we might have over 400 associates working through the assembly process, so it gives us the opportunity to do multiple training sessions at multiple stations with the car in different stages of assembly.

“Previously if, for example, I wanted to train someone on the assembly of the suspension, I would have to ensure that all the preceding processes had been completed [on the physical vehicle]. Now I can train virtually, on any stage of the assembly process. It gives us so much more flexibility and efficiency, and the associates get a much better feel for the tasks they are being trained to perform.”

“Another key point of this software is that it allows the associate to take a screenshot of the stages of the process they are working through and they can provide clear feedback on this, identifying any issues before they reach physical production,” Sippel notes. “It’s a big factor in maintaining high quality standards and speeding up the development of the assembly process.”

Benefits from design through to production

One thing that’s clear is that using this VR system, ELP has seen some important improvements, not only in its assembly operations but also in supporting the design of the vehicle. Sippel offers some examples: “It can be simple things that make a difference. For example, during the virtual training the associates identified that if the water hoses were set in a different sequence it would improve the process for them. Our process team checked this feedback and agreed the change. It’s also been an important tool in giving the associates more of a voice in how the processes are developed.”

Ramsey notes: “Even during the design phase of the vehicle we could ask Joey [Sippel]’s team to simulate something and see what impact it had on the assembly process and how the associates performed the task. This feedback did result in some changes to the vehicle design.”

With speed to market of a new vehicle being another pressure on production operations, all the assembly processes for a new model need to be defined, honed and put into action in the shortest possible time, while avoiding any quality issues or bottlenecks on the line. So being able to train the assembly team earlier and more comprehensively on the processes has supported the introduction of the new model. “In the past there were always a few processes on the line that would present issues with quality but with this build [MDX], using the VR tool there are virtually none. For example, we had an associate on the line reporting they were having difficulty with a task and after the shift we were able to go back and use the VR tool to address the issue. The following shift the associate had no problems. It gives us a great opportunity to very quickly resolve issues that might have taken a couple weeks,” says Ramsey.

The VR training system has helped to maintain, and in some areas improve, the high build quality standards on the new MDX

And the VR system has provided a window of opportunity to focus on different aspects of the assembly process. Sippel observes that “it has certainly shortened the time it has taken to mature these assembly processes. For the associates, they already know the process steps before they get to the actual car, the software essentially completes the ‘what to do’ part of the process. Then it simply becomes learning the fitting technique. So, we can focus on this aspect and it’s definitely helped with quality."

To manage the production of rapidly changing vehicle technologies and market demands, OEMs are utilising a wide range of new digital technologies, such as this VR training system. However, a key factor in the successful application of these technologies is them being ‘user friendly’, accessible and usable to the wider teams across a production plant and the experience at ELP demonstrates that this is not only possible but also highly beneficial.

Watch a clip of the virtual training system: 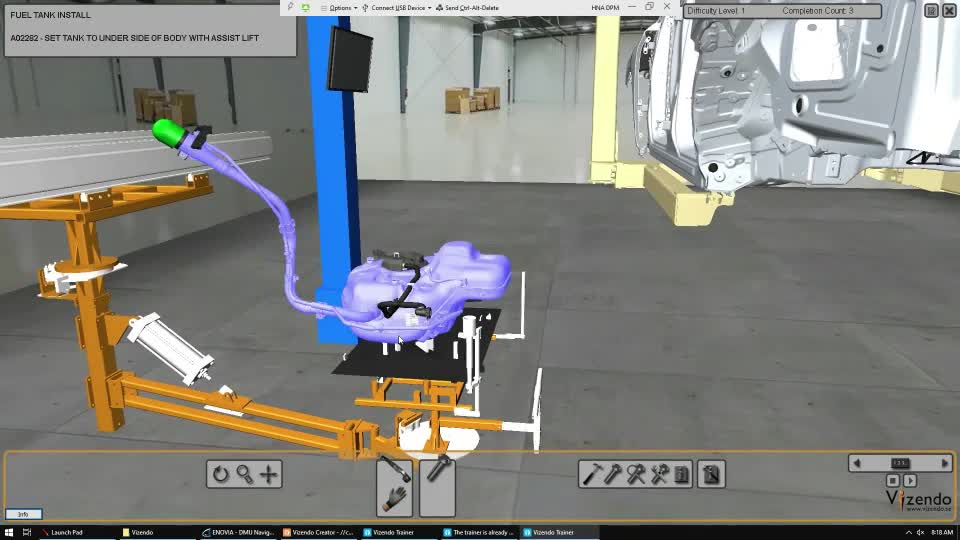