Final trim and assembly has historically been laborious, but ABB’s new generation of industrial robots will provide more flexibility and a better return on investment

While many manufacturing steps have already been automated in cycle mode, the degree of automation in a continuously moving assembly line is still very low – because the car is constantly in motion, with low cycle times. Here, flexible and scalable automation solutions are in demand; ones that, if required, can also take on completely new processes.

The primary challenge of state-of-the-art FTA is completing several vehicles in a row on a single line and covering the entire assembly process – e.g. the installation of doors, cockpit, seats, carpets, and windows on a single line. This results in further advantages, such as lower storage, series flexibility, and just-in-time delivery.

Continuously moving assembly is far from being fully automated, as it would be necessary for today’s manufacturing requirements. Practice to date has been for robots to chiefly take over jobs that are too monotonous or too heavy for humans.

This may be explained by the fact that it is not easy to implement basic FTA automation in a continuously moving process because a vehicle’s body on the line is permanently in motion. For a robot to accurately hang a door or bolt a cockpit, the system must be able to accurately follow a moving body – whether on a conveyor, a suspended conveyor system, or an automated guided vehicle (AGV) – and proceed cautiously, without the risk of a collision and damage to the finished painted vehicle.

With an average cycle time of 60 seconds, the robot must hit the exact point of a screw or hinge to secure the component to the body or interior. ABB now offers engineering solutions for automated FTA that combine robots, software solutions, AGVs, and application technology.

For example, ABB’s FTA solution leverages advanced image processing, sensing, and the safety-certified SafeMove2 human-machine collaboration software to automate a major car maker’s continuously moving FTA operations. Robots carry out individual assembly steps without the need to stop the line: from installing and removing doors, through inserting the cockpit and seats, to laying the carpet.

This line allows a high degree of flexibility as various model types and colours can be used, one behind the other. At the same time, it always guarantees precision. Last but not least, this automated FTA represents a decisive step toward open systems, where workpieces or bodies move flexibly from one robot station to the next on the factory floor in order to be assembled there.

Robots such as the IRB 6700 and IRB 2600, with appropriate handling capacity, take over the final assembly of various components in ABB’s solution and execute these tasks in a continuously moving process. When the automated guided vehicle (AGV) carrying the body of a vehicle moves to the assembly unit, the camera of ABB’s Conveyor Tracking System detects its exact position.

At the same time, it synchronises the speed of the robot travelling on the linear axis parallel to the AGV with the speed of the AGV. The camera also reports the colour of the body, ensuring that the vehicle model is fitted with the correct component of the same colour.

The assembly process can begin when the body and robot are in the correct position. During the work process, the AGV makes the robot travel at an adjusted speed and the robot starts a predefined and programmed assembly process.

A second camera system installed on the robot scans the body for predefined features that are always the same and that have been applied to the car with minimal tolerance. Since the cameras lose focus as soon as the arm of the robot comes close to the vehicle, the system switches from a vision-controlled robot system to a sensor-equipped one with ABB’s Integrated Force Control.

The tactile functionality of the Force Control technology allows the robot to respond to its environment even when the cameras, its eyes as it were, cannot see. In other words, it can sense its way around assembly operations with millimeter precision. It adapts its programmed lane and speed based on feedback from the sensor, which allows it, for example, to hang a door exactly in the hinges provided.

The Force Control sensor is mounted on top of the sixth axis, directly between the robot and the gripping system, allowing accurate measurement at all times of the force that it requires to be transmitted. The sensor must be able to react to changes at any time, for example, at times when the robot must slow down because the AGV is running slower.

For the system – and hence, the robot – to sense its way through an assembly situation and dock with no more than the necessary force, the optical system and Integrated Force Control must harmonise exactly with one another. This is achieved by appropriate programming. 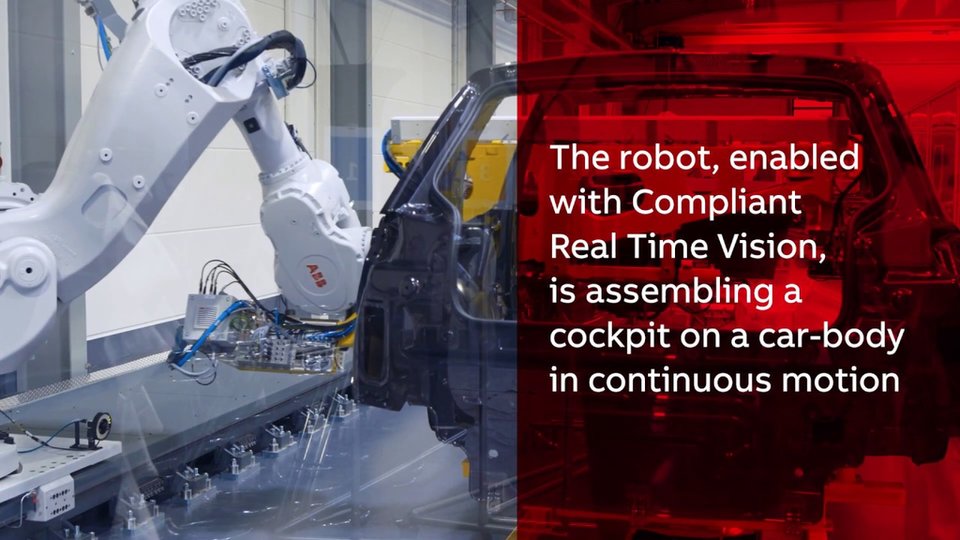 Moving towards an open system

Currently, FTA automation faces the challenge of car makers typically wishing to manufacture many different vehicle models and variants (left and right-hand drive, two- and four-door) on the same assembly line, which makes it difficult to implement comprehensive automation systems.

However, the requirements for automated assembly in a continuously moving process can be reduced if, for example, models are created on a common platform, meaning several models being equipped with the same body and their points of connection to the grippers always being the same.

So far, only a few manufacturers have implemented this idea of a model platform. This concept is also interesting for OEMs building a completely new manufacturing facility. It allows them to lay the foundation for an open system instead of having to laboriously integrate individual automated processes into existing lines.

The goal for Final Trim and Assembly must be open systems in which automated guided vehicles flexibly approach individual automated assembly stations as required. This creates a true factory of the future, one based on modular manufacturing systems and flexible automation solutions that are digitally controlled and interconnected.

Such open systems also require a collaboration between human and machine at an entirely new level. ABB has developed SafeMove2 working closely with its customers. This safety-certified solution, comprising ABB’s software and hardware components, provides features to enable operators to interact with the robot system at high-speed during high cycle times.

In fact, SafeMove2 already makes it easy to implement an application that requires practically no enclosure – with safety sensors, laser scanners, and light barriers. Here, sensors in the robot cell report someone’s presence. The system throttles the robot’s speed when a worker approaches, allowing the human and the machine to operate side by side.

In addition, the robot controller allows the robot to operate only in precisely calculated, predetermined spaces. It stops completely when this invisible boundary of the operator or the machine is crossed. If the operator leaves the defined safety area, the system continues its job at initial speed.

Up to four robots can be monitored for tool position, tool speed, and tool orientation. With SafeMove2, a safety-certified product, ABB offers a system that minimises the cost of FTA safety enclosures and that can reduce total investment by up to 30 per cent.

ABB’s SafeMove2 technology facilitates closer collaboration between human and robots and is consistent with legal requirements. This is a crucial step toward building open production systems, where humans and robots handle tasks as needed and not rigidly in line. Car manufacturers will benefit from a safe process, will save on costs, and will be able to flexibly manufacture models in line with market requirements.

Read more on e-mobility and ABB