Can an electric van deliver for LEVC?

The first part of the £500m project has succeeded. LEVC, aka the London Electric Vehicle Company, last year built 2,500 range-extended taxis from its production hub on the outskirts of Coventry, central England, taking the total built to 4,000. London is now teeming with these mostly silent, elegantly designed cabs packed with technology mainly repurposed from Geely’s Volvo brand.

But now comes the moment in the plan where, all being well, the company can turn a profit. This year LEVC will launch a one-tonne electric van built using many of the same parts that the company hopes will take the plant closer to its 24,000 capacity. Eventually, the van will account for 70% of production, it hopes.

LEVC needs the economies of scale the van will bring. Both the TX5 taxi and the VN5 van, production of which starts in the third quarter of this year (coronavirus depending), use a costly combination of bonded aluminium body and petrol-electric drivetrain. The long supply chain meanwhile stretches to South Korea for the battery cells and China for the 1.5-litre three-cylinder petrol engine.

The young company has already replaced its CEO. The replacement, Joerg Hofmann, arrived early last year from Audi and immediately set to work cutting costs in a bid to bring the profit target closer. “This was a big challenge which caused some turbulences as well,” he said of LEVC’s vehicle strategy in an interview last October. “Maybe the turbulences in the past haven’t been addressed in the right way, and that is what we are doing now.”

We asked plant director Mofid Elkemiri to give us an example of some of the ways he has cut costs in a plant that was only inaugurated back in 2017, and he mentioned a simpler way to fit the range-extender engine using £1,000 trolleys rather than a £30,000 lift system.

However, the switch to incorporate the van on the same line as the taxi has required investment of more than £5m, mainly to increase the number of stations to speed up the takt time from the current 29 minutes to an eventual 10-12. That means pushing the workforce from around 200 now to 500 by the end of next year with the addition of an extra shift. If the van proves a hit then they’d need a third shift to reach the 24,000 capacity.

The economies of scale are there. As well as being built on the same line as the taxi, the van also uses 65% of the same parts. The front end is the same, as is the drivetrain. The slow speed of production at the moment means that LEVC can even build prototypes on the taxi line. “The advantage is that staff use real production tools, so they get experience and you learn the steps you have to change in the real world,” Hoffman said when we visited the plant early March.

LEVC’s UK localisation rate is only around 30% of parts and 40% by value. The big UK value piece is the supply of extruded aluminium parts from Hydro in Caerphilly, south Wales, which LEVC then bonds in its body shop. There’s no riveting used to attach these parts except to locate them ahead of bonding, meaning the body shop is incredibly peaceful. Once the glue has been applied, a combination of lasers and cameras check that the 400 parts are exactly in place, then the bodies are baked in one of four ovens for 20 mins at 185°C (“same as a pizza,” Elkemiri says).

Then pre-painted panels are glued onto the body on a cold cure line before heading off to the assembly line and its EMS monorail carriers.

The vehicle briefly leaves the EMS to be carried by AGV to have brake pipes and wiring harnesses attached before heading back to the EMS to have its 31kWh battery pack, three-cylinder engine and ancillary parts fitted. Then comes trim, where the van skips the five stations focused on the taxi interior.

Succeeding in a cost-conscious market

When the van launches it will largely have the electrified LCV market to itself, bar the Ford Transit Custom plug-in hybrid. But while urban emissions legislation is moving to the side of the VN5, the likely high price will count against it in a notoriously cost-conscious market.

It’s too early to say whether LEVC’s high-risk gamble will pay off, but the rigour obviously going into production of the vehicles should give them a fighting chance of becoming another British automotive success story. 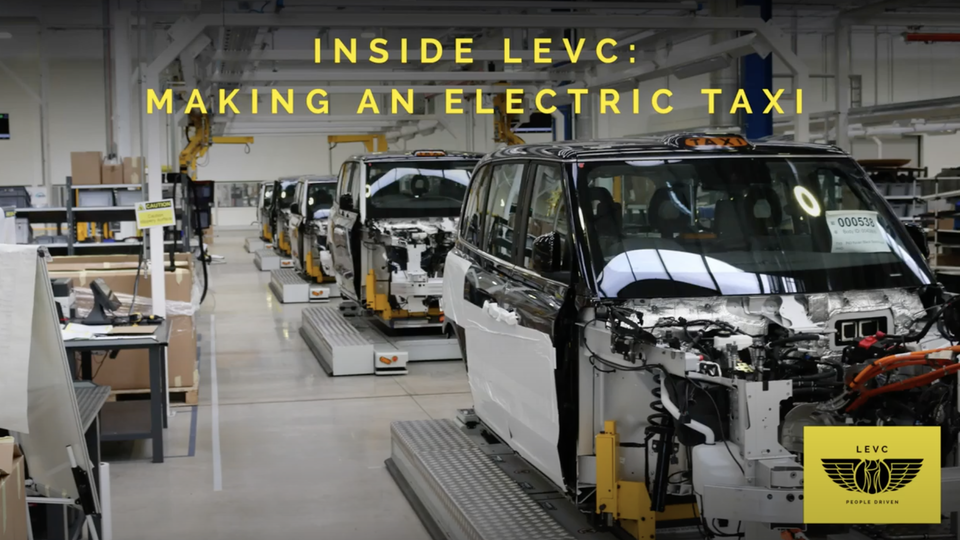 LEVC’s Mofid Elkemiri was recruited to the Geely-owned company back in 2016 as launch director for the TX5 electric taxi. Prior to that he spent six years at UK-based trim supplier CAB Automotive, where he rose to the position of engineering and quality director. AMS speaks to him about his current role, ramping up production, battery cell supply and the relationship with the parent company. But first, we ask how the factory has been affected by the recent coronavirus measures and the suspension of production…

Did you leave any staff in the plant when you took the decision to shut down on 24 March as part of the wider UK lockdown?

Around five or six security guards and maintenance people. We’ve still got launch engineers working on the van but mainly at home or at test facilities.

The UK government said it will pay 80% of employee wages employers for least three months starting from 1 March 2020. Have you furloughed employees yet?

We will be furloughing around 250 employees once the [UK government] scheme becomes available from the point we stopped production. All affected employees have been notified. We have decided as a positive message to pay all employees 100% of their salaries despite the government only funding 80%.

We will run to a faster cycle (takt) time, but to do that you need as many stations as possible and less work content on each station. At the moment we have around 95 stations, we would get close to 120-125. Currently the cycle time is 29 minutes. To achieve maximum capacity it would be 10-12 minutes.

What investment have you added for the van?

Just for the van project we have invested just over £5 million for equipment, which is a mix of van specific and volume-related. So for example we’ve ordered five additional AGVs (automatic guided vehicles) and they’re not cheap at around half a million pounds for five.

What have you learned in two years of taxi production to be able to cut costs?

Keep it simple. That is our motto right now. What we’ve learned is quite significant and we learned it the hard way. We’ve had engineers creating complicated and expensive fixtures to aid production processes but after reviewing those we’ve found there are far simpler methods of making cars. So we’re trying to reduce the amount of complex processes.

The engine fit. After the drivetrain marriage we had an assembly fixture to put the little range-extender engine in. It was very well thought through but the guys on the line realised they can actually can fit the engine quicker, safer and better by creating a really simple floor-driven trolley on wheels. That trolley was £1000 in comparison to the fixture which were £30,000 each, and you need three on the line.

Do you need your own paintshop?

At the moment Paintbox in Banbury [in Oxfordshire, 40km from LEVC] pre-paint all the body panels then we bond them on. Nearly every car manufacturer in the world uses its own paint shop because that’s where the biggest value added is in terms of process and also in terms of quality. However it’s also a huge investment and therefore we are looking at multiple options.

What level automation are you at the moment?

It’s fairly low at the moment, 5-10%. Even our fastest cycle time of 10 minute is very slow. The big OEMs have cycle times of less than one minute, so it doesn’t make sense to have a lot of automation.

Isn’t it expensive to have a longer cycle time?

It is expensive because you talking mainly about manual labour, and manual labour compared to investment is always more expensive. However you have to calculate whether spending a lot of money on robots makes sense over the longevity of the product, especially as the investment is mainly bespoke to a product. So you can’t say, ‘okay now I pay one million pounds on a fixture because I’ll robotise it and pay it off over 25,000 units and I’ll keep using it, because probably it won’t fit for the next model and then you have to spend another million. Its always a calculation between volume and investment.

Your battery cells come from South Korea. With the battery at 20% of the cost of the vehicle, are you hoping to source batteries closer in the future?

Batteries are not that easy to source, because you have to have cells, the battery management system, and someone to assemble it. When you’re locked into supply agreements with major supplies like LG it’s not that easy to re-source the batteries. We are looking for alternatives like everybody else but it will be years before we get a sourcing agreement that’s more localised than South Korea.

Does being part of Geely give you more clout?

We always use the joint resources of Volvo Group and Geely in order to shop as best we can. We have always had our own cell line at LG from day one, but as cells become more and more common [ie stop being unique to one client] we have to fight our own sibling companies over who gets cells first.

Where are you finding skills lacking and what would you encourage educational facilities to focus more on?

We’re quite severely lacking people who have done a technical apprenticeship. It’s getting better, but in the last couple of years, there was a very high focus on non-technical jobs such as the NHS [healthcare] and teaching, and we could see the knowledge just wasn’t there. In UK we’ve had to build that knowledge with foreign labour, but we also need try to make sure people and schools start to take an interest in technically skilled jobs.

Do you take on many apprentices?

Our intake last year was 17 and the time before 21. We’ve lost only three in total over this period and they also progress within in the company.