Inacore creates casting cores for BMW using a cutting-edge networked, digital production system. Right in the middle of one of the world's most modern core shops, 18 industrial robots from ABB cope with harsh conditions as they handle and process the sand cores after blowing.

What is essentially new about Inacore's production is the 100 per cent part tracking and data transparency of all machines and systems, and Inacore is also completely networked with the BMW warehouse. Thanks to its consistent approach to digitization, Inacore is able to provide customer quality management with specific production and storage parameters for each individual sand core in real time if required meaning the high-tech core shop sets new standards in digitization and efficiency.

Fully integrated ABB industrial robots are an important part of Inacore's automation solution. They must function very reliably under the harsh external conditions in the production of inorganic cores: Temperatures of up to 45 °C are accompanied by the presence of abrasive dusts and an atmosphere with high humidity and a high pH value.

A total of 18 ABB industrial robots handle and process the freshly blown sand cores. Rudolf Wintgens, Managing Director Technologies at Laempe Mössner Sinto, explains: "Each of the six core blowers is equipped with identical but
independent production cells, each equipped with an IRB 6700 extraction robot and two IRB 1200 deburring robots. The IRB 6700 simultaneously removes all sand cores from the core boxes with a large gripper. Inacore works with different core boxes; the complete core package for an engine block is assembled by BMW in the correct sequence when the cores are insert§§ed into the moulds.

The IRB 1200 controls Inacore with MultiMove. "We will never operate the two deburring robots per cell individually, so this configuration was the obvious choice," says Rudolf Wintgens. "In production, every cubic centimeter of space counts. Because we only need one robot control unit in the MultiMove, we reduce space requirements and costs". 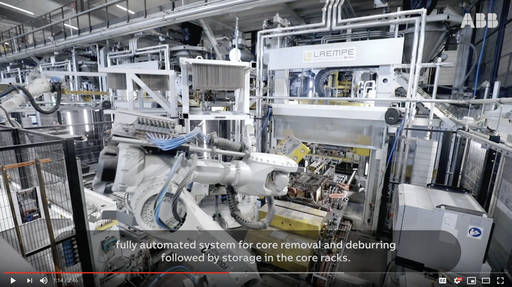 Andreas Mössner, Managing Director of Inacore and Laempe Mössner Sinto, explains: "We appreciate the reliability of the ABB robots in harsh environments and the good adaptability of the programming, especially during deburring. In addition, ABB was able to score with our other requirements and also with the price." The companies behind Inacore have extensive experience with robots for core making and casting; Laempe and Scheuchl implement ABB robots for customers worldwide. Laempe is a pioneer in the automation of sand core production using robots. Together with ABB, Laempe installed the first robot in a core-making application back in 1996.

Laempe is an ABB Authorized Value Provider. For many years, Scheuchl has relied on robots for casting production and raw casting machining. During the new installation for Inacore, the assembly team and the programmers from Laempe and Scheuchl provided all services for the implementation of the ABB robots.

Inacore believe that automation solutions with robots are the best method to produce with high reproducibility and quality. "We achieve shorter cycle times and lower personnel requirements and can thus reduce costs," says Dr. Udo Dinglreiter, Managing Director of Inacore and Scheuchl. "From a business point of view, ABB robots are favored for their low overall and implementation costs. In addition, the robot relieves employees of physically heavy, repetitive and dangerous tasks, thus increasing occupational safety”.

Using a large gripper, the IRB 6700 simultaneously removes all sand cores from the core boxes.

The core blowing method is used in foundry technology to produce cores. They are needed to produce a casting with a cavity, for example engine blocks. The shape of the cavity to be produced is produced from a specially prepared material - sand of a certain grain size and binder - in the core blower. This means that the moulding material is introduced into the core box at a certain firing pressure - usually two to six bar. After curing, the sand core is placed inside the mould at the point where the cavity is to be created. After casting, the moulding material from which the core was made is removed through the openings provided in the casting construction.